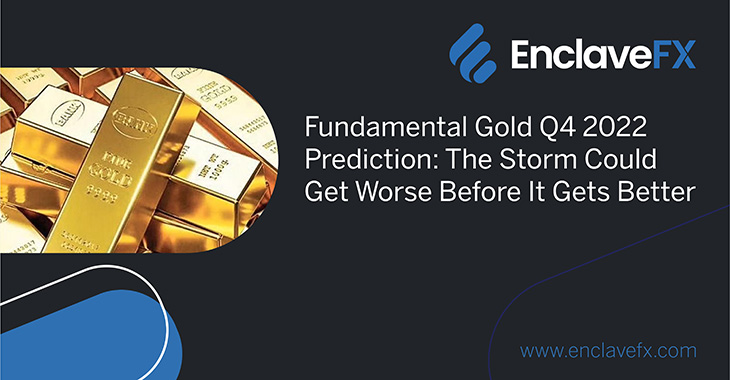 The third quarter saw significant losses for gold, continuing the previous three months' drop. Although bullion temporarily surged above $1,800 per troy ounce in late July and early August, sellers soon reappeared to cap the upside and cause a dramatic negative reversal, sending prices plummeting below $1,700 by the end of September.

Rising borrowing costs in developed nations, but more significantly in the US, contributed to this sell-off. In 2022, central banks worldwide quickly reduced stimulus to control skyrocketing prices. For instance, the Federal Reserve has tightened monetary policy by 300 basis points over the past seven months, which has allowed sovereign bond rates and the US dollar to soar to multi-year highs, both of which are negative factors for the price of gold.

The chart below demonstrates how XAU/USD had consistently declined while the DXY index and the US 10-year TIPS, a proxy for real yields, had soared higher since March when the FOMC started to decrease accommodation. The chart is presented on an inverted scale for easier visualization.

Generally speaking, commodities become more expensive in other currencies as the US dollar strengthens. This can reduce consumer demand for specific items, leading to lower pricing in international markets. Additionally, as opportunity costs grow for storing assets like precious metals that don't pay interest or dividends, real yields climb, prompting investors to look for investments with higher returns.

There is reason to think that gold may continue to perform poorly in the first quarter of 2018 before bottoming out in late fall. The Fed's rising hawkishness suggests that its benchmark interest rate could reach a peak of 4.6% next year, up from its current 3.1% (midpoint), and its "higher-for-longer pledge" should keep USUS Treasury yields and the US dollar biassed to the upside, creating an unfavorable environment for the precious metal in the short term. The figure below illustrates the performance of nominal yields this year, with the FOMC's normalization process moving forward.

However, when tighter financial conditions start to permeate the actual economy and reinforce adverse risks for both the US and global economies, the prognosis for gold may improve towards the turn of the year. Since the monetary policy has a long and erratic lag, it is possible that the full adverse effects of the Fed's rate hike cycle are still to come. Defensive assets may profit as the negative impacts become more noticeable before the quarter is out, helped in part by safe-haven flows.

Additionally, when recessionary headwinds become too great to ignore, forward-looking investors and traders will start to posture for a dovish pivot, gradually driving down long-term bond rates, which typically represent growth and inflation forecasts for the future. Gold prices might level out when these things happen and begin a more enduring recovery in the first half of 2023. On the other hand, poor fundamentals indicate more weakness or, at the very least sideways price movement in XAU/USD in the early stages of the fourth quarter.

This Analysis is Based On Price Action Theory. According to ...

The most actively traded market in the world is a ...