The EUR/GBP Price is on the Verge of Crossing the 0.8860 Hurdles During a Four-Day Upward Trend 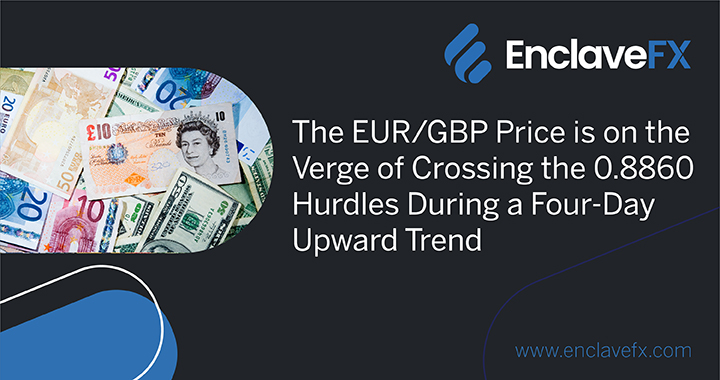 As bulls poke the intraday high as well as the weekly high, EUR/GBP rises to 0.8845 heading into Wednesday’s European session. In doing so, the cross-currency pair rises for the fourth consecutive day after reversing from the 50% Fibonacci retracement of its run-up from early December to January 13.

Additionally, the EUR/GBP pair's ability to cross the 100-SMA hurdle, as well as the bullish MACD signals, favor the bulls, as well as a successful rebound from the significant Fibonacci retracement level of 0.8722.

There is, however, a downward-sloping resistance line from January 13, close to 0.8860 at the latest, which guards the quote's immediate upside.

As an alternative, pullback moves may initially aim for the 100-SMA level surrounding 0.8815 prior to targeting the round figure of 0.8800.

The EUR/GBP bears should be attracted by the 50% Fibonacci retracement level of 0.8722.