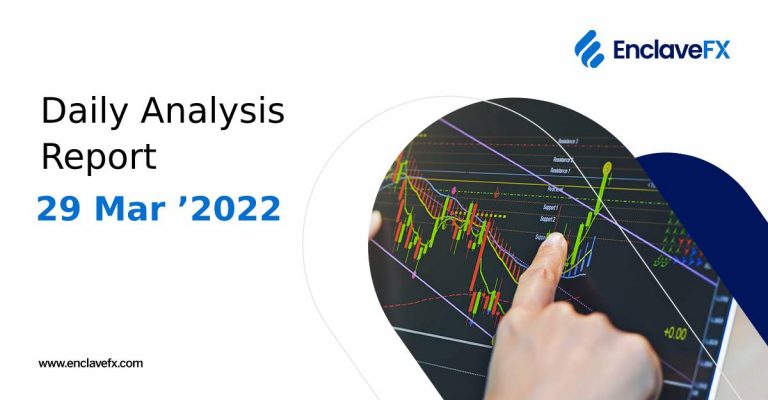 During the Asian session, the euro displays a moderate rise against the US dollar, stabilizing at about 1.1000. The euro had gone lower the day before, approaching the local lows of March 15, but the “bulls” were able to recuperate by the end of the afternoon session. Because Monday’s macroeconomic calendar was empty and the situation in Eastern Europe remained unchanged, market activity remained muted. Russia is still conducting a special military operation in Ukraine, and peace talks have yet to get the sides closer to some sort of agreement.

Western countries, for their part, are preparing fresh measures against Russia’s economy, the most notable of which is a likely ban or large decrease in Russian energy resource imports. Some European countries reject a Russian Federation oil and gas embargo, claiming that it would jeopardize their energy security. Investors anticipate the release of March consumer inflation numbers in Germany this week. According to current projections, the report may show an acceleration of inflation in the EU’s largest economy from 5.1 percent to 6.1 percent.

During the morning session, the British pound is trading in an uptrend versus the US dollar, correcting after a significant loss the day before, which resulted in the re-establishment of local lows from March 16. The findings of the Governor of the Bank of England, Andrew Bailey’s speech, which presented a gloomy evaluation of the situation in the British economy due to anti-Russian sanctions, imposed pressure on GBP/USD positions. The official specifically warned of a potential gasoline shortage, which would result in a significant increase in the cost of living. The United Kingdom had previously placed a comprehensive ban on Russian energy imports, following the lead of the United States.

Although the UK is not overly reliant on direct Russian imports, rising global commodity prices are bound to impact its economy. Investors are currently anticipating the release of February data on Consumer Credit Dynamics. Forecasts on indicators are generally optimistic, but they do not represent the existing status of the credit market and will thus be mostly useless. The Bank of England will also release its Quarterly Bulletin for Q1 2022.

In the Asian session, the New Zealand dollar exhibited mixed trading characteristics against the US dollar, consolidating at the support level of 0.6900. The instrument dropped sharply yesterday, but this was due only to technical factors and market expectations that the US Federal Reserve will intensify monetary policy tightening shortly. The regulator is expected to hike the interest rate by 50 basis points all at once in May and implement quantitative tightening procedures. The escalation of the military situation in Ukraine has also boosted demand for the US currency. Traders are dissatisfied with the negotiation process, which has yielded no results.

As a result, the pressure from sanctions is only mounting, and Russia is already considering punitive measures. Russian President Vladimir Putin, in particular, ordered that all gas payments be converted to rubles, which many European countries saw as a breach of existing treaties. Investors are waiting for a slew of macroeconomic data from the United States today. The S&P Case-Shiller House Price Index for January and the March indicator of consumer confidence are also worth watching. John Williams, the President of the New York Fed and a member of the FOMC, is scheduled to speak later in the day.

During Asian trading, the US dollar is falling against the Japanese yen, reversing a significant surge the day before that led to new highs not seen since August 2015. Analysts blame the Bank of Japan’s attempts to lower bond yields for the Japanese currency’s sharp depreciation. The Bank of Japan already has an exceptionally liberal monetary policy. However, to keep the yield on treasury securities from rising, it announced the redemption of an unlimited amount of debt obligations with a 5- to 10-year maturity period.

The Bank of Japan is likely to make purchases for three days in a row, which could alter the rate of the Japanese yen. Optimistic macroeconomic indicators from Japan provide some support for the yen today. In February, the country’s unemployment rate unexpectedly declined from 2.8 percent to 2.7 percent, against benign projections. In February, the Jobs/Applicants Ratio climbed from 1.2 to 1.21.

During the Asian session, gold prices are consolidating near 1920.00. The instrument had experienced a pretty active decrease the day before, owing to an increase in the attractiveness of the US currency to investors. The US dollar is rising on predictions that the US Federal Reserve would tighten monetary policy further at its meeting in May, raising the rate by 50 basis points. Furthermore, a surge in the yield on treasury bonds is increasing demand for the US currency: the yield on 10-year securities has risen above 2.55 percent for the first time since May 2019.

As a result of the escalation of the conflict in Ukraine, demand for gold as a safe-haven asset remains high. Traders are dissatisfied with the discussion process and believe the parties will not be able to strike a peace accord shortly.