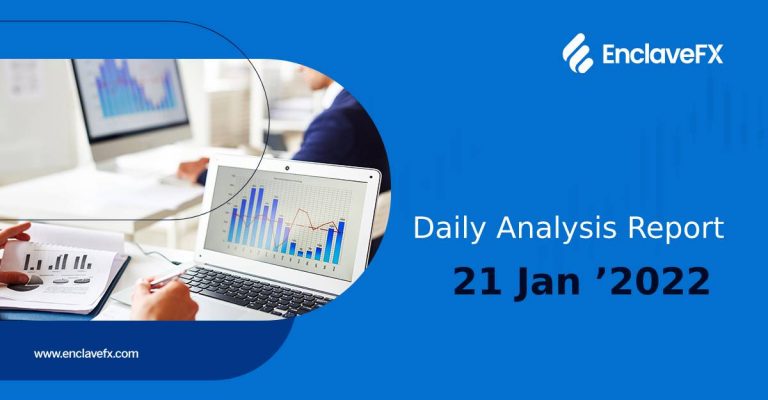 During the Asian session, the euro is displaying mild gains against the US dollar, recovering from a fall the day before. As a result, EUR/USD has reaffirmed its local lows since January 10. Yesterday’s macroeconomic numbers from the euro area, which again pointed to record inflation rates in the region, put pressure on the asset’s position. According to the data, the annual increase rate of consumer prices in the euro area was roughly 5.0 percent in December, but the monthly growth rate was only 0.4 percent. Separately, investors were interested in German data. In December, the Producer Price Index increased by 5% and reached a new high of 24.2 percent year on year, much-exceeding market predictions of 0.8 percent and 19.4 percent, respectively. Investors are paying close attention to Christine Lagarde, the President of the European Central Bank (ECB). She is expected to spend a large portion of her report on the forecast for monetary policy shortly. In addition, the Consumer Confidence Index for January is expected to be issued during the day.

During the morning session, the pound is trading in a range of directions against the US dollar, consolidating between 1.3600 and local lows from January 18. The US dollar is actively regaining its positions towards the week’s conclusion; however, its growth is constrained by the lack of confidence in US macroeconomic data. The day before, disappointing statistics revealed an increase in the number of Initial Jobless Claims from 231K to 286K, while economists expected the figure to drop to 220K. The number of Continuing Jobless Claims for the week ending January 7 jumped from 1.551 million to 1.635 million, worse than market expectations of 1.58 million. Currently, investors anticipate the release of December statistics on the dynamics of retail sales in the United Kingdom. On the other hand, analysts’ expectations do not predict any support for the pound, so the asset’s corrective sentiment could worsen.

In Asian trade, the New Zealand dollar has been steadily falling, creating a corrective momentum in the pair with the US dollar, which it began the day before, and updating local lows from December 21. Even the relatively weak macroeconomic indicators from the United States do not affect the instrument’s growth of “bearish” dynamics. The previous day’s statistics showed a significant increase in the number of Initial Jobless Claims for the week ending January 14 from 231K to 286K, despite projections of a decline to 220K. The four-week average of initial jobless claims was 231K. As a result, today’s numbers from New Zealand turned out to be cautiously optimistic. In December, the Business NZ PMI increased from 50.6 to 53.7 points; nevertheless, market expectations predicted a rise to 56 points. After a steep drop of 27.3 percent in the previous month, visitor arrivals increased by 3.8 percent in November.

The US dollar begins the trading day with a sharp drop against the Japanese yen, attempting to consolidate below the psychological threshold of 114.00 and update the January 13 lows. Despite modest gains versus other high-yielding currencies, it loses ground against the yen as global consumer inflation rises to new highs. At the same time, the dollar is still supported by the possibility of a US Federal Reserve interest rate cut, and the market expects additional confirmation of this next week when the American regulator meets. The market dynamics were unaffected by the macroeconomic statistics released today in Japan. In December, the National Consumer Price Index increased modestly from 0.6 percent to 0.8 percent, but excluding Fresh Food, the same index stayed unchanged at 0.5 percent.

Gold prices stabilize near 1840.00 after the week, awaiting new drivers to emerge on the market. The day before, macroeconomic data thwarted the dollar’s attempt at corrective growth, which failed to strengthen the currency. The figures showed an unexpected increase in Initial Jobless Claims from 231K to 286K for the week ending January 14, higher than market expectations of 220K. Another bad point was the drop in Existing Home Sales in December, which fell by 4.6 percent after increasing by 2.2 percent the previous month, despite experts’ expectations of 0.8 percent.

Experts cannot pinpoint a single cause for the current decreasing trend; it is most likely a combination of bad events. One of these may be a drop in the US stock market, which is highly associated with the cryptocurrency industry, as well as an increase in bond yields as the US Federal Reserve prepares to raise interest rates. Another factor that weighed on the crypto sector was the Bank of Russia’s report “Cryptocurrencies: Trends, Risks, and Measures,” in which the regulator proposed banning the use and mining of cryptocurrencies in the country, citing threats to financial stability, citizen well-being, and monetary policy sovereignty. At the same time, it is still legal to own digital currencies. The dossier also claims that speculation drives the expansion of the cryptocurrency market and that the assets themselves are widely employed in unlawful operations. Experts believe that the present prohibition will have little impact on the market because the volume of transactions in Russia is very low, which is not the case with mining. After the United States and Kazakhstan, the country currently ranks third in BTC production, accounting for more than 10% of the worldwide hash rate. The limits imposed may cause more challenges for the digital asset market.

In addition to the bad news, the tightening of the restrictions for simultaneously advertising cryptocurrencies in many jurisdictions should be underlined. Rishi Sunak, the British Finance Minister, has recommended outlawing unregulated advertising that may mislead citizens. The official believes that the Financial Conduct Authority of the United Kingdom (FCA) should be in charge of this area and that the FCA will then license the activities. The Monetary Authority of Singapore (MAS) also banned widespread cryptocurrency promotion and the installation of crypto maps this week. Officials justified their decision by stating that they wanted to make public access to tokens more difficult to avoid reckless trading and safeguard citizens from financial losses and unjustifiable risks. Spain has also set new rules. Advertisers will need to focus on the risks of digital trading currencies, among other things, to notify users about them before engaging in token transactions.

It should be noted that during the week, ADA stood out among the main currencies in the market; it was actively increasing at the start of the week but has since lost its position. The establishment of the Pavia application on the Cardano blockchain and the launch of the SundaeSwap (DEX) platform is thought to have bolstered the token’s position. Among other positive developments, it’s worth noting the start of a joint project between cryptocurrency exchange Coinbase and payment giant Mastercard Inc., which will allow Mastercard cardholders to purchase NTF tokens, as well as Google’s foray into the blockchain technology market, which had previously been viewed with suspicion. According to Bloomberg, the digital behemoth is putting together a team of developers to work on blockchain solutions. Support for cryptocurrencies, in particular, can be introduced to the Google Pay payment service.

The prices of most cryptocurrencies may consolidate or continue to fall next week.