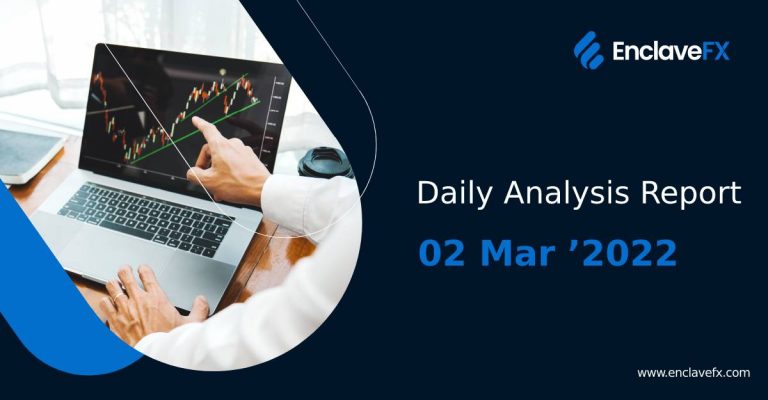 During the Asian session, the European currency exhibited mixed trading behavior against the US dollar, stabilizing near 1.1100. The single currency steadily declined the day before, reaching new lows versus the US dollar for the first time since May 2020. The escalating geopolitical tension in Eastern Europe exerts pressure on the trading instrument’s position, prompting investors to sell riskier assets. Negotiations aimed at achieving an immediate ceasefire, which the parties attempted to hold at the end of February, failed. Russian troops continue to undertake a special military operation on Ukrainian soil. Meanwhile, sanctions are putting unprecedented pressure on the Russian economy, which has some negative consequences.

The results of yesterday’s European macroeconomic figures were mixed. Although commercial activity numbers revealed a little dip in February, the data does not yet reflect such a dramatic deterioration in the situation in Eastern Europe. In any case, the Markit Manufacturing PMI in the euro area decreased from 58.4 to 58.2 points in February, despite analysts expecting no change. On the other hand, inflation numbers in Germany bolstered the euro’s position. The Harmonized Price Index rose 5.5 percent, exceeding a 5.4 percent rise expectation.

During the morning session, the British pound is trading near zero against the US dollar, stabilizing near new local lows set the day before and psychological support near 1.3300. Fearing further escalating hostilities around Ukraine, investors are still eager to buy the US dollar as a safe-haven currency. Large corporations are leaving Russia and refusing to cooperate with their Russian counterparts due to harsh economic sanctions imposed by Western countries. The pound received no meaningful boost from macroeconomic data released in the UK yesterday.

In January, consumer credit declined from 0.817 billion to 0.608 billion pounds, falling short of experts’ expectations of 1.05 billion pounds. At the same time, the Markit Manufacturing PMI rose from 57.3 to 58.0 points in February, outperforming analysts’ neutral estimates. The BRC Shop Price Index numbers in the UK are now supporting the instrument slightly. The indicator increased by 1.8 percent in January, up from 1.5 percent in December.

In Asian trading, the Australian dollar is strengthening against the US dollar, attempting to breach the strong resistance level of 0.7300 once more. On Tuesday, the AUD/USD showed active growth in the first half of the day, even managing to reclaim local highs from January 14; however, the “bulls” had entirely lost their edge by the end of the day. The Reserve Bank of Australia (RBA) had left the benchmark interest rate at 0.10 percent the day before, stating that rising geopolitical tensions throughout the world and the deployment of military force in Eastern Europe had a major negative influence on the deployment of military force global economic recovery prospects.

In one way or another, the AUD/USD rates are rising at the moment, and positive macroeconomic data back up the “bulls.” In Q4 2021, Australia’s GDP increased by 3.4 percent after falling by 1.9 percent the previous quarter, despite economists expecting only a 3.0 percent increase. The Australian economy grew faster than expected, from 3.9 percent to 4.2 percent in yearly terms. This outperformed preliminary market expectations of 3.7 percent.

In the Asian session, the US dollar grows slowly against the Japanese yen, attempting to consolidate above the psychological resistance level of 115.00. The dollar is being bolstered by a new escalation of tensions in Ukraine following the failure of the first round of talks to achieve an immediate ceasefire. The special military operation continues, and Western countries impose ever-increasing economic and blockade penalties. The US macroeconomic data presented yesterday were relatively upbeat, giving reason to believe that the US Federal Reserve will continue to tighten monetary policy at its next meeting in late March.

In February, the ISM Manufacturing PMI increased from 57.6 to 58.6, above market expectations of a 58-point increase. The ISM Manufacturing New Orders Index also improved significantly, rising from 57.9 to 61.7 points, compared to analysts’ expectations of only 59.1 points. Investors are anticipating the release of the ADP Employment Change report, as well as a speech by US Federal Reserve Chair Jerome Powell in Congress, followed by the publishing of the regulator’s monthly economic review.

During the Asian session, gold prices showed a technical decrease, retreating from the local highs of February 24, which had been updated the day before. The instrument is falling against a backdrop of some strengthening in the US dollar, which is bolstered by upbeat macroeconomic data and predictions of imminent changes in the US Federal Reserve’s monetary policy vector. At the end of March, the regulator is expected to have a normal meeting, and it is expected that the main interest rate will be raised, possibly by 50 basis points all at once. Investors are anticipating the release of the ADP Employment Change report, the US Federal Reserve’s monthly economic review (the “Beige Book”), and the final report on the US economy this week.